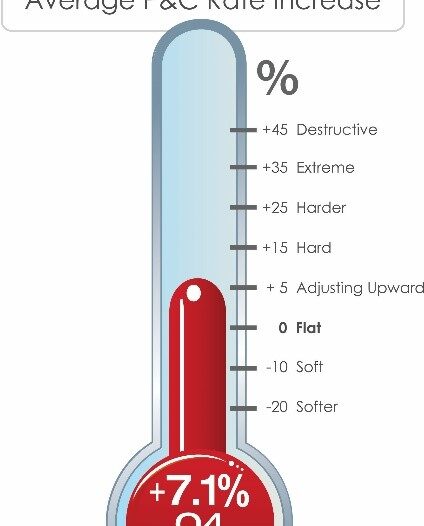 Despite 2020 being one of the strangest years in recent history, the insurance industry continued to function efficiently. The fourth quarter 2020 composite rate was up 7.1 percent as compared to up 6.25 percent for the third quarter 2020.

The biggest rate increases by line of coverage were for umbrella liability, professional lines and directors and officers liability. The only rate decreases from the third to the fourth quarter were for inland marine and crime coverages.

Rates increased for all sizes of businesses and industries except for public entities and energy companies.

Richard Kerr, CEO of MarketScout noted, “Rate increases are continuing. We believe the slight moderation in energy rates in the fourth quarter 2020 is an anomaly based on the considerable reduction in exposures in the oil and gas sector. Rates for public entities were also relatively modest.”

In reviewing the results for all of 2020, the composite rate increase was 5.6 percent. Mr. Kerr noted, “Composite rates for property and casualty insurance have traded in a relatively tight corridor the last ten years as compared to the ten-year period of 2001 to 2010 when rate swings were considerably more volatile. Improved underwriting tools, catastrophe modeling and more thoughtful reinsurance placements have taken most of the severe peaks and valleys out of the market. Simply stated, underwriters are smarter than they were 15 years ago. The exceptional underwriting and technology tools help make for a more stable market.”

The following graphic reflects rate changes in US commercial insurance for the last 19 years.

A summary of the fourth quarter 2020 rates by coverage, industry class and account size is set forth below.