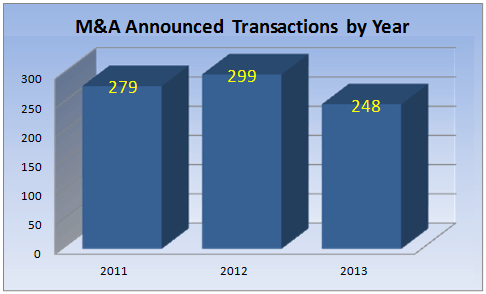 There were a total of 248 announced agent-broker M&A transactions in 2013.  Activity in 2013 was very close to the average number per year over the last six years of 245.  Regardless of a very slow start at the beginning of 2013, the second half of the year finished strong as it was as active as any comparable 2nd half of the year period since 2008, except for the 2012 blockbuster year.

Quarter by quarter 2013 M&A activity was a roller coaster.  The year started strong early from the late reporting carryover from 2012.  It fell off a cliff in the middle of the year then finished with a flourish in one of the most active  fourth quarters in the last  6 years.  The  second quarter had 48 announced transactions representing the lowest quarterly number other than the 2009-2010 recession period.  The fourth quarter had 76 announced deals that has only been exceeded by the historic high Q4-2012 and Q4-2010/ Q1-2011, with each of these two periods impacted by tax changes, actual or anticipated.  The 2013 year  did not have any external factors influencing buyers or sellers as experienced in the past. 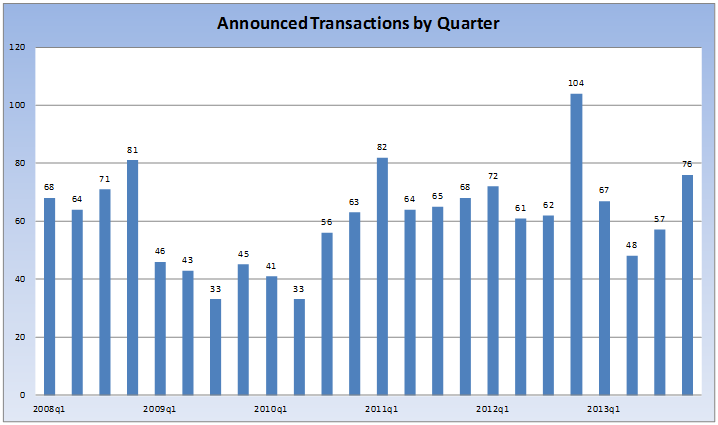 The ownership structure of the buy side group provides some insight to overall M&A activity.  2013 reflected a seminal shift in the landscape as that was the year Private Equity (“PE”) backed acquirers topped the chart for the largest number of total announced transactions over all the other categories including the Public Broker group. 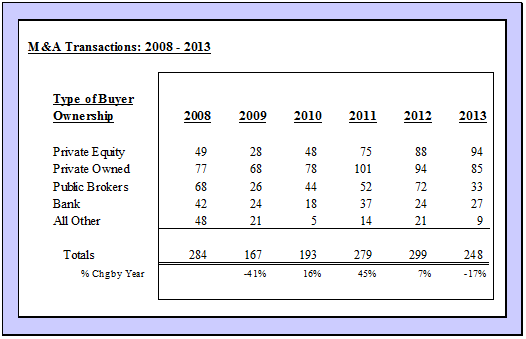 Included in the PE backed category were three of the top five acquirers (Hub International, Assured Partners and Confie Seguros);  these three had nearly 25% of the total number of announced transactions in 2013 and 20% over the past three years (see also table on p. 10).  Public broker activity fell off significantly in 2013 with less than half as many deals as were closed in 2012.

The Bank Owned category has been dominated for a number of years by Wells Fargo Insurance Services and BB&T Insurance Services.  They were virtually silent on the M&A front in 2013 with only one transaction reported.    Western Financial Group, a wholly owned subsidiary of Desjardins Group based in Canada, has led the Bank Owned group with a total of 17 transactions over the last three years including five in 2013, all in Canada.

The primary driver of the decrease in the “All Other” category in 2013 was the decline of agency acquisitions by insurance companies – dropping from 12 transactions in 2012 to only two in 2013.