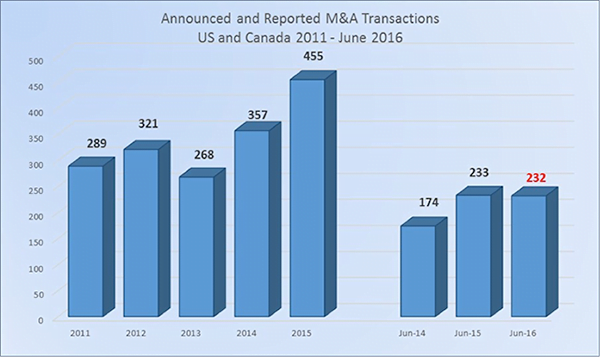 Explanation and sources of data:

Data is for U.S. and Canadian transactions in the insurance distribution sector for both retail and wholesale producers, including managing general agencies/managing general underwriters (MGA/MGU). These agencies and brokers provide property and casualty (P&C) insurance, employee benefits (EB), life/financial (L/F) services or any combination thereof.

Firms with private equity (PE) backing are identified in the chart.

An appendix of tables follows the report.

Data for reported and announced transactions have been obtained from various sources, including press releases, trade press articles, company websites and direct communications with buyers.

While brokers’ merger and acquisition (M&A) activity fell short of setting any records during the first half of 2016, buyers and sellers continued to feed their hearty appetites for deals and push up the M&A activity trend line.  First-half 2016 activity dropped nominally to 232 announced deals from 233 during the same period last year, yet the first two quarters this year rank as the second-most active six-month period since OPTIS began tracking M&A transactions in 2008.

As the following chart shows, agency M&A activity has been on a fairly steady climb over the past 4+ years, other than the spike at the end of 2012 and related drop in early 2013 related to the tax law change. 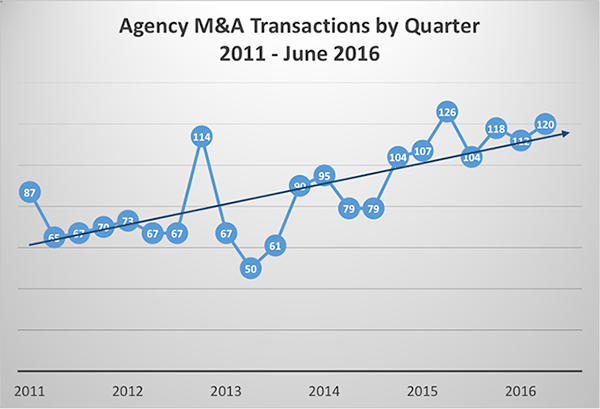 First-half M&A activity this year also extended the trend of 100 or more transactions to seven consecutive quarters. The last three-month period when brokers did not complete at least 100 deals was 2014’s third quarter.

The M&A count during the first half of 2016 was essentially flat compared with first-half activity last year and up slightly from the last half-year in 2015.  We anticipate the recent strong industry-consolidation trend will continue for the near term as acquisitions are an important growth strategy for many firms, especially those backed by private-equity capital.  Of course, that projection does not account for any significant, unforeseen financial, political or economic events that would change the underlying M&A market.