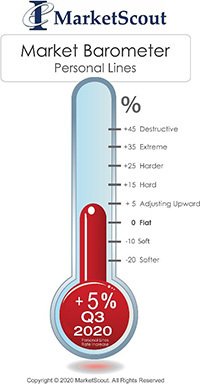 Third quarter composite rate for personal lines in the US measured plus 5 percent.

According to Richard Kerr, CEO and Founder of MarketScout, “The composite rate is measured on millions of insureds across the United States in low risk areas. Conversely, homeowners in California and coastal areas of Florida are suffering massive rate increases. If an insured owns a home in high risk wildfire or hurricane areas and has suffered prior losses, rate increases can be as high as 40 percent. Many admitted insurers are avoiding taking risk in these areas, thereby, driving insureds to the non-admitted market. Since there is less regulation for non-admitted insurers, they can restrict coverage and charge higher rates.”

A summary of the third quarter 2020 personal lines rates is set forth below.

A summary of the third quarter 2020 personal lines rates is set forth below.