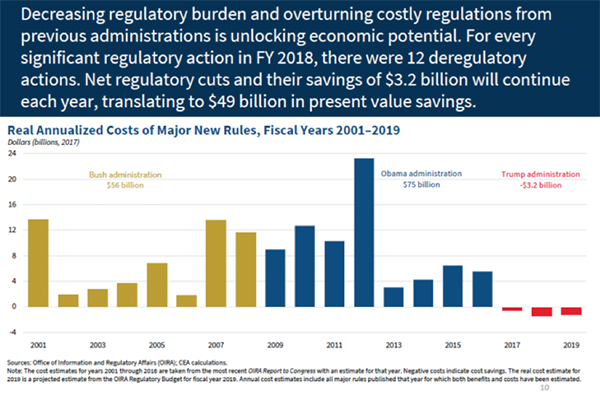 Independent insurance agents and agency principals overwhelmingly supported Donald Trump over Hillary Clinton in 2016 – by 71 to 19 percent, according to a Financial Institutions Institute survey conducted right after the election.

Two and half years after Trump’s inauguration, things have been pretty good for the industry. Part of that is attributable to a cyclical economic expansion that may have happened anyway to some degree. But insurance agents and agencies, as well as the industry as a whole, have benefitted substantially from the Trump presidency.

Specifically, agencies benefitted from tax cuts, an improving economy, increasing consumer disposable incomes, favorable pro-business regulatory changes, and a generally hardening market that boosted premium rates across most lines – and with them, agency revenues and profits.

Most taxpayers benefitted from the Tax Cuts and Jobs Act – the sweeping series of tax cuts passed at the end of 2017. Both corporate and personal income tax rates and capital gains rates were cut across the board.

From the agency perspective, though, the most significant aspect of the Tax Cuts and Jobs Act was the resounding policy victory achieved by the Independent Insurance Agents and Brokers of America.

The vast majority of independent insurance agency practices – about 80 percent – are legally organized as pass-through entities. These include both S corporations and limited liability companies (LLCs).

The tax reforms championed by the Trump Administration over ferocious Democratic opposition included a significant tax break for pass-through entities: S corporations, partnerships, trusts and sole proprietorships are now allowed to deduct up to 20 percent of qualified income from these businesses on their personal income tax returns. Since C corporations also saw a significant tax cut in the corporate income tax (20 percent of Big I member firms are C corporations), the intent behind this tax cut, called the Section 199A Deduction, was to allow these generally smaller businesses to benefit from the tax cut plan.

There was initially some doubt about whether independent insurance agencies would qualify for this favorable tax treatment. At issue was whether the IRS would consider insurance agencies to be “engaged in a specified service trade or business.” The insurance industry prevailed, and now principals of all agencies, whether big or small, can deduct up to 20 percent from qualified income from their insurance businesses, no matter their personal income levels. The Section 199A deduction was made available for the first time on the agency owners’ 2018 federal income tax returns.
The result was a quick increase in agency cash flow and profitability for agencies across all insurance lines.

The insurance industry also scored a victory in convincing the Department of Labor to scuttle the planned Fiduciary Rule, which was opposed by some 86 percent of agents polled. This rule would have put substantial burdens on insurance professionals and agencies involved in offering retirement advice. The DOL’s decision not to pursue implementation was a major plus for the life and annuity segments of the insurance industry.

This particular regulatory victory was specific to the insurance industry. But agencies and their principals also benefitted from a much more business-friendly regulatory environment across the board. This graphic from the Small Business and Entrepreneurship Counsel depicts the estimated costs of major new rule changes each year for the last 18 years.

Agencies benefitted from a more favorable financial and employment regulatory environments: Between 2001 and 2016, the Federal government added an average of 53 economically significant regulations each year. Since January 2017, the average has been only 4, according to a report from the Council of Economic Advisors. And that doesn’t count deregulatory actions.

Economic growth and consumer confidence have been expanding faster than expected over the past two years. According to the Small Business Administration, the Small Business Optimism Index shot up immediately upon Trump’s electoral victory, from 95 to 102. As of this writing, the Index stands even higher, at 103.3. Businesses have been expanding and hiring. As a result:

Unemployment is at an 18-year low, at 3.8 percent, and job growth is high;

Homeownership and entrepreneurship rates have increased.

Both health insurance agents and small businesses, in general, were greatly interested in the fight over the controversial Affordable Care Act. President Trump vowed to repeal and replace the entire law. Ultimately, though, Republicans were rebuffed in a close vote (and by the late Senator McCain’s dramatic “NO” vote) in their efforts for a broad repeal.

However, the Trump Administration and its Congressional allies did manage to effectively repeal the mandate by setting the penalty for not owning health insurance to zero, and in putting off the tax on so-called “Cadillac tax.” This tax, enacted as part of the ACA, would assess a 40 percent tax on all employee health plans with costs exceeding a certain amount.

The Cadillac Tax was ferociously opposed by insurance industry groups, including Big I. “This destructive tax will do irreparable damage to the employee benefits marketplace,” wrote the insurance group in a release. “It is imperative that Congress protect the employer-sponsored health care system for the 181 million Americans who depend on it. The Big “I” looks forward to continuing to work with the Trump Administration and leaders in Congress to ensure this tax never sees the light of day.”

Insurance industry advocates managed to convince Congress to postpone the Cadillac Tax until 2022.