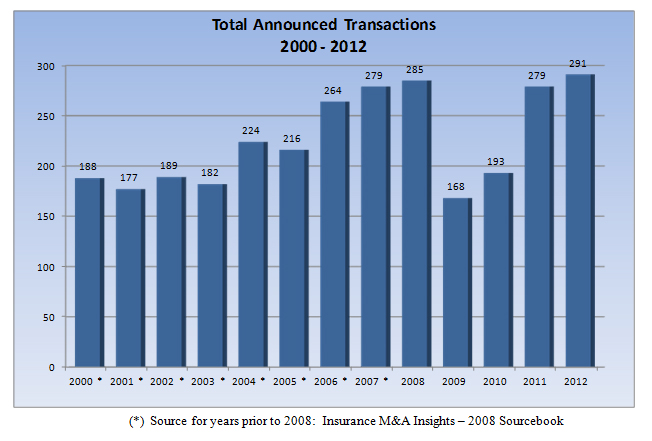 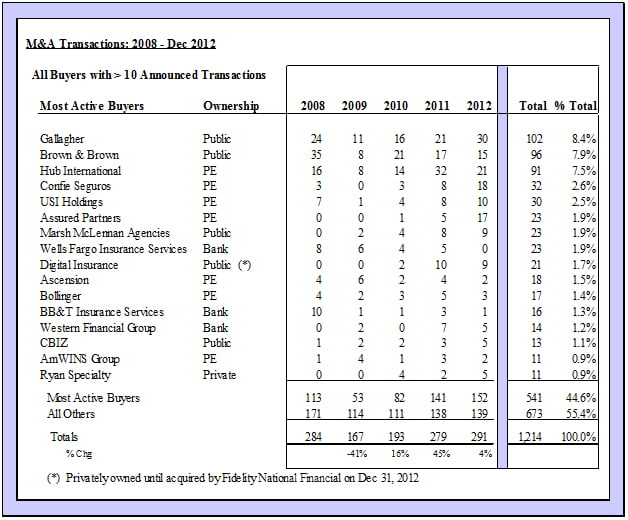 Acquisitions by firms with PE backing  increased 15% in 2012 from 2011 as Hub,  Confie Seguros, USI, and Assured Partners combined completed 66 transactions last year compared to 53 in 2011.  Hub continues to be the most active PE backed buyer with 21 transactions in 2012, down from their record high of 32 deals in the prior year, and second only to Gallagher in the total number of deals completed.

On the public broker side, Gallagher announced 30  transactions in 2012 followed by Brown & Brown with 15.  Marsh McLennan Agencies, the middle market retail broker Marsh started in 2008, completed nine deals last year on top of eight in 2011.

There was only one active bank acquirer in 2012, Western Financial Group, with five announced transactions following seven deals in 2011.  Western Financial is a bank and financial services company based and operating exclusively in Canada.   BB&T Insurance Services did close one large transaction on the wholesale side with the acquisition of Crump in February 2012, but otherwise BB&T Insurance Services and Wells Fargo Insurance Services were both all but inactive.  The rest of the bank-financial institution buyers were scattered and diverse. On the flip side, there were a number of divestitures in 2012 of bank owned agency platforms.

Though not a conventional M&A deal, there were three noteworthy transactions involving recapitalizations whereby a PE firm’s equity was purchased by a new PE entity.  PE firms commonly effect such recapitalizations in a five plus year cycle in order to capitalize their investment.  The three noteworthy transactions were: Goldman Sachs sold its interest in USI to Onex Corp (Canada); Blackstone Capital’s interest in Alliant was acquired by KKR; and lastly, Genstar Capital’s ownership in Confie Seguros was sold to ABRY Partners.

The primary business focus of the agencies being sold (P&C, Employee Benefits or “EB” and PC/EB) is also of interest especially with the relatively significant number of transactions on the EB side.  Although the number of pure EB firms sold in 2012 was down slightly from 2011, the numbers are still consistent with 2008 levels before the passage of PPACA.  Given the uncertainty of how PPACA will impact EB firms’ revenue and the complexity of implementing the legislation at the Federal and State levels, the large number of EB firms being sold is interesting.  A number of EB focused firms may have felt the pressure due to PPACA to have a larger offering of value added and other resources for delivery to their clients and were thereby influenced to sell and partner with a larger organization in order to maintain a competitive edge. 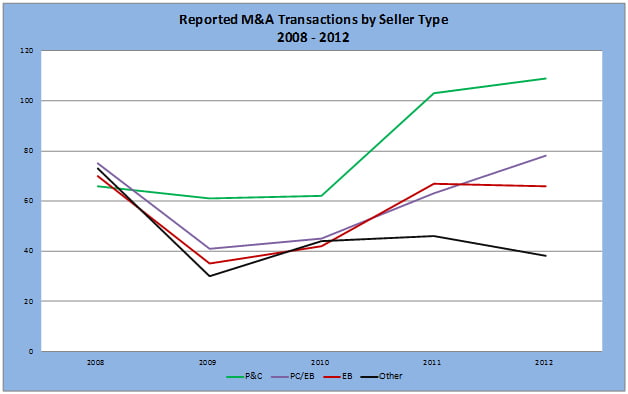 Looking back over the last five years, three firms have clearly been the dominant buyers; Gallagher closed 102 transactions while Brown and Brown and Hub closed 96 and 91, respectively.

Marsh & McLennan Agencies (“MMA”) likewise had another busy year in 2012 with nine announced transactions after completing eight deals in 2011.  In addition, it is relevant to note both Assured Partners and MMA purchased several large firms and have thereby accumulated significant volume in a relatively short period of time.  Finally, Digital Insurance, with a singular focus on EB business, has been very busy over the last two years with 19 total transactions.  Digital was privately owned firm until being acquired on December 31, 2012 by Fidelity National Financial.